Swann Engineering Group worked alongside a specialist helicopter which assisted with the successful deployment of our 25 metre 5SH Lattice telecommunication tower in Oban, West Scotland.

The remote nature of the installation location, combined with very limited site access, meant that we had to utilise a purpose-built lifting helicopter to lift and transport our structure from the assembly point to the install site approximately 150 metres away.

🎬 Watch Video – Click here to view the helicopter in action! 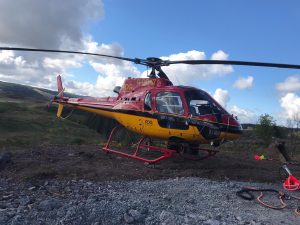 For many of our project sites situated in rural locations, it is often possible to transport our structure, building materials and heavy-duty machinery via existing or temporary access routes, however for this project:

Upon reviewing these complications and having previously utilised helicopter lifts for similar projects, we deemed that having a helicopter pick up and fly the tower sections over these obstacles was the optimal solution. Onsite personnel would then use All-Terrain-Vehicles (ATVs) to travel the 150 metres between the assembly and build site to carry out the tower installation.

Swann Engineering Group has the capacity to deliver pre-assembled towers to reduce install time while on site. However, our assembly options were limited in this instance due to the 1000kg weight limit of the helicopter. This meant that our Braintree-based Engineering Design team had to carefully consider the assembly configuration of our proposed 5SH tower.

To ensure the helicopter could lift our tower safely, the bottom two panels of the tower (the heaviest sections) were kept as separate segments, rather than pre-assembled. This meant that each individual section of the tower could be lifted from the assembly area and safely flown to the install site. 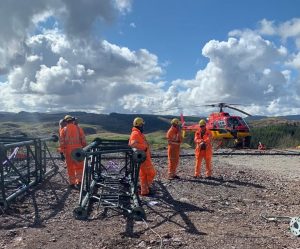 Taking place over just one week, the helicopter carried out 9 flights between the assembly and install site, transporting over 5 tonnes of structural components in the process – a feat that just would not have been possible with land vehicles due to the unpassable terrain. 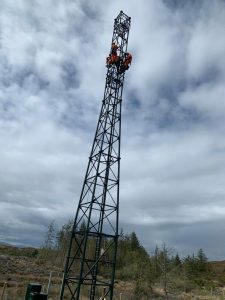 Swann Engineering Group is proud to have delivered over 400 structures for EE as part of the Emergency Services Network (ESN) programme, with many of these deployments taking place in remote and rural locations.

The crucial in-house and hands-on experience gained from this deployment has further enhanced our project management capabilities and ensures that we can overcome any logistical challenge we encounter in the future.

Thanks to Maule Consulting Ltd and Mono Consultants for supplying the Helicopter and the Riggers who worked alongside our own on-site team to deliver this project on schedule and to specification.

Well done to everyone involved in this challenging but hugely fulfilling telecom structural deployment.

🎬 Watch Video – Click here to view the helicopter in action!

For more information about any of our products and services, please feel free to email enquiries@Swanngroupltd.com or contact our Customer Support Team directly via 0800 090 2375.

Additionally, you can keep up to date with our latest projects by following us on our LinkedIn